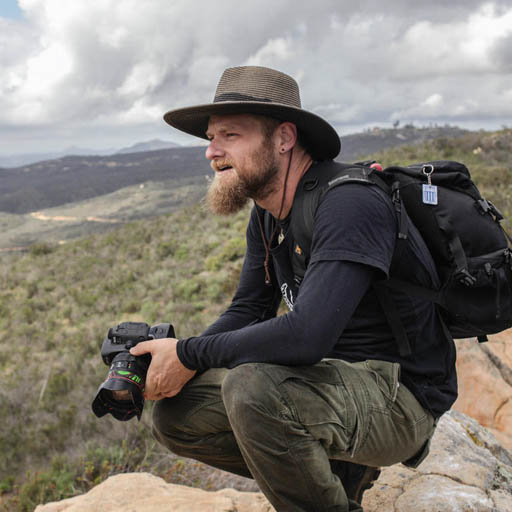 Andrew's is a staggeringly ordinary life that, mercifully, spun off course rather early.

When Andrew was ten years old, his family moved to Papua New Guinea, where he grew up immersed in the jungles and cultures of the world's largest tropical island. He found a curiosity there that he's been chasing around the world ever since.

Andrew is a freediver, a musician, an artist, a photographer, a drone operator, and an audio/video engineer. At various times Andrew has hung his hat and camera in London, New York, Beer Sheva, Anuradhapura, and several other cities that he's used as jumping off points to explore and photograph some of the most remote and beautiful places on Earth. Andrew's passport is a wrinkly, leathery old book stamped with ink from around the world. Andrew has lived a life that has uniquely suited him to excavate, shape, and share digital stories in our increasingly connected world. Philosophically inclined as it may be, the best way to understand Andrew is perhaps as a medium through which the world is getting to know itself.

When he's not hanging off the side of a roaring Sri Lanken communter train, sneaking the perfect shot of the elephants at bathtime, or catching a much needed nap on a riverboat in the Peruvian Amazon, he is bolted to the chair with the glow of dual monitors on his face as he mixes sounds, videos, and photos into wild and expressive digital content.

Andrew met his wife while they were both studying at Messiah College in Pennsylvania and they currently live in San Diego, where Andrew is a somewhat obsessive gardener cultivating over 60 different species of plants around his home.

Oh! Almost forgot. Somewhere in a dusty drawer he's got a master's degree in international human rights too.

Chasing Curiosity - Sci-fi musings and travel stories from long-time collaborator and friend Andrew James Ferris, and if you listen to the end, or just skip to the end, plans for a new adventure.

Casting Into The Unknown - Andrew hosts a fellow photographer and wilderness aficionado, Casey Cooper, recounting stories, sharing photography practices, and musing about the virtues found only in the most remote corners of the natural world.

The Heart Of A Traveler - Andrew and Costa host Arlette Diederiks and take you on a journey into the heart of a traveler, and the transformational power of seeing the world.

Hero's Journey - Costa hosts Andrew James Ferris on the podcast for a deep dive into Joseph Campbell's Hero's Journey and its implications on story, psychology, innovation, and more.